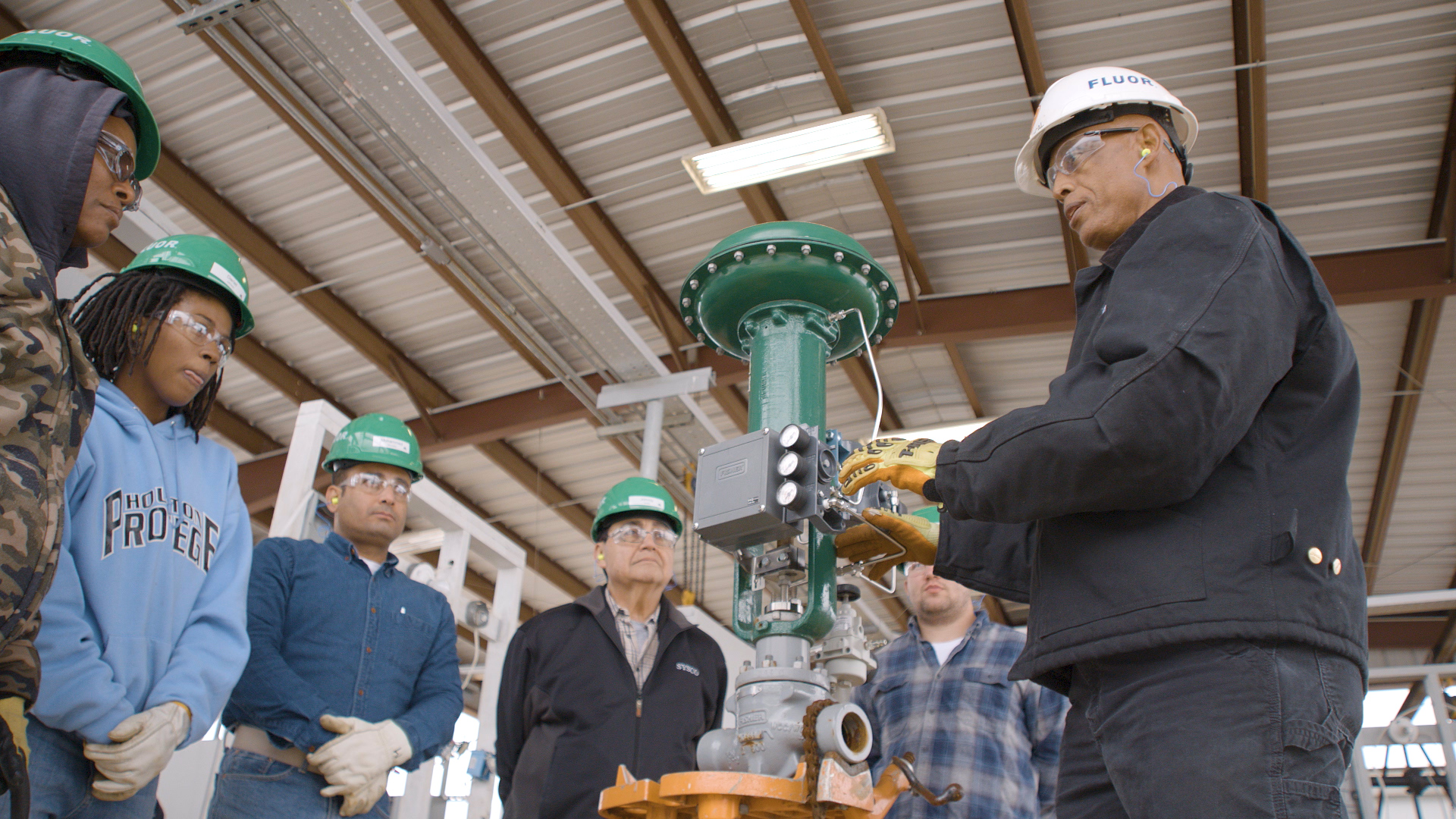 When Clemon Prevost was a kid, he noticed the repairman who would come to the house to fix the TV earned as much in an hour as his dad did for a whole day’s work. So by 13 years old, the self-taught, budding electrician became the neighborhood TV repairman.

“What sparked my interest in the electrical field may have been kind of immature,” Prevost recalls, “but after 42 years in the industry, I’m still here.”

Countless students are grateful that’s the case. After three decades as a craft professional, Prevost turned to teaching, first at Remington College and how as a senior talent development specialist at Fluor’s Gulf Coast Craft Training Center in Pasadena, Texas. There, 169 students have completed electrical training under Prevost’s guidance, with 78 percent of them working as of November 1, 2018. He has delivered 314,603 manhours of craft training without a safety incident, as well as earned the top trainee attendance award for 12 straight sessions.

Those numbers alone make Prevost a worthy recipient of Associated Builders and Contractors’ 2019 Craft Instructor of the Year award – which he received in March from sponsors NCCER and Tradesmen International – but the job means so much more to him than just turning out skilled workers.

“On the first day of class, I tell the students I’m going to give 110%, and I only ask them to give 100%. The instructor should be all in, mind and soul,” he says. “My students can feel the passion and know I really care for them.”

Prevost’s best tool in the classroom is leading by example, and that means shedding any misconceptions about being perfect.

“I’m truthful and I tell them all my flaws. I tell t hem this journey wasn’t always easy for me and that you have to earn it.”

Prevost has a wealth of experience to draw upon. After graduating with an associate’s degree in electronics technology from the College of the Mainland in Texas City, he worked as a repairman and instrumentation and electrical technician from 1977 to 2002.

His next opportunity was working as a learning and development project manager at BP from 2002 to 2010. The following five years were spent as Remington College’s instructor of industrial electrical, instrumentation and specialized production.

In 2015, Prevost found a home at Fluor’s Gulf Coast Craft Training Center, where he conducts classroom and simulated workplace instruction, as well as represents the company at college, high school and community evenets.

According to his colleagues, Prevost constantly develops ways to make classroom and lab experiences relevant. For example, he has set up go/no-go test fixtures to develop conduit bending skills, has trainees build start/stop stations from schematics, and adds time limits to wiring projects to introduce competition and productivity awareness.

Many students come into training with a lot of concerns, often carrying the weight of past challenges and not knowing what the future holds. Prevost remembers one student who had been expelled from several schools, with a history of prioritizing basketball over learning.

“But in my class, he’d go home and study right away, and eventually stopped bringing a basketball to class. When his mom asked what I did to get her son to change, I told her I just gave him everything I had.”

It’s all about motivating students, and it can’t be the same across the board, he adds. “Some students are visual, while you can lecture others. And if one student is struggling, I tell my top students to be mentors so they can learn to give back.”

Prevost also feeds students’ dreams by letting them know they are there to launch a career. He brings in past graduates for inspiration and networking, and even shows off his car to illustrate the fruits of hard work. He’s also known for ending class like a soap opera so everyone is eager to come back the next day.

“You have to use everything possible to pull students in,” he says. “You have to explain the workforce shortage, convince them the industry is a safe place to be, and assure them there will always be a need for qualified craft workers and managers. No matter what their weak or strong points are, there’s a place for them in construction.”

The merit shop construction philosophy is all about rewarding people and companies for their effort and quality performance. The message is not lost on Prevost, who appreciates the industry’s equal playing field for those who are willing to work hard.

“Being a craft professional has taken me every place that I’ve ever wanted to be. It really pays off. And I’m not just talking about money. I’m talking about making me feel good about doing the work every day.”

The reward that comes from teaching is evident in the words of Prevost’s students: “He makes it easy to ask questions, and your questions will not go unanswered. I learned a lot from him and see myself going farther,” says E. DeShawne Toney.

Adds Rosemary Matthew: “He has really changed my life with all the skills I learned. My craft career is very bright.”

For Prevost, being an instructor is the best possible way to give back to an industry that has given him so much.

“This is the best job I’ve ever had in my life. I don’t know when I’m going to retire because you need to have a job to retire, and I don’t consider t his a job.”

Alvaro Torres was the youngest competitor in the 2019 ABC National Craft Competition. The eldest of two sons, Torres was born in Pasadena, Texas to a stay at home mother and a father who worked multiple side jobs to support his family. His father was involved in welding and fabrication work, and brought Torres to one of his sites when he was in his teenage years.

As a high schooler, Torres was exposed to some of the work his father did, which inspired him to consider a career in welding. When he realized the opportunities that welding provides, he decided he wanted to follow in in the footsteps of his father and pursue a career in construction and welding.

“When I was a sophomore, I won my first competition with Skills USA,” says Torres, recalling how the win lit an inferno of passion to succeed in the welding craft. “Welding is part of who I am now, and it’s all I think about. It’s like artwork to me, and I”m the artist.”

Torres continued to work through spring break of his senior year to prepare for the ABC Craft Competition in Long Beach, California. On top of his preparation, he attended San Jacinto College in the evenings to glean a better understanding of welding technology.

That hard work and dedication make Torres a worthy recipient of Associated Builders and Contractors’ 2019 Craft Championship Award – which he received in March from ABC, NCCER and Tradesmen International.

“I look up to my father and believe that he is very skilled,” says Torres. “He has put a lot of time and sacrifice into what he does to provide for our family. I want to make him proud that I was able to take what he gave me and make something great of it.”

Excerpts from Construction Executive, a publication of Associated Builders and Contractors. Used with permission.

The Importance of Storytelling in Messaging Suicide Prevention in the Workplace

The Importance of Storytelling in Messaging Suicide Prevention in the Workplace